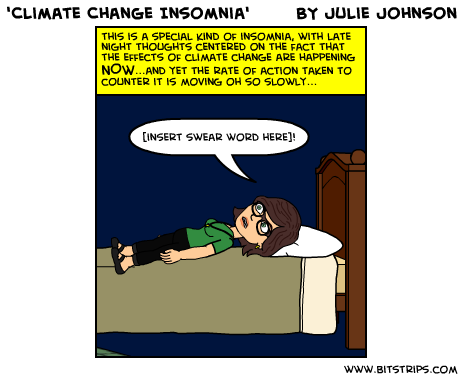 Since attending the Climate Reality Conference in Toronto in early July I have experienced, a couple of times now, a particular kind of insomnia I have decided to call CLIMATE CHANGE INSOMNIA.

This is what's happening: I can't get to sleep because I'm worrying about climate change.

Once you have fully opened your eyes to the facts of climate change--which, to put it frankly, is apocalyptic in nature, right up there with nuclear Armageddon and zombie hoards--it is hard to 'forget it'.

It's there. In your brain.

I will never, ever forget as long as live the vibe in that conference room in Toronto on July 9 when Al Gore, master of the slide show, gave his presentation.

If you've seen An Inconvenient Truth (which you must, it is right up there with Rachel Carson's Silent Spring as part of Environmental Activism 101), then you will get the gist of it.

What I saw in Toronto was the revised version, updated for 2015. This includes lots and lots of current examples of how climate change is happening NOW.

Not in a few years, not 'in the future'.

He starts his presentation with a view of the Earth from Space. Several views of it. Our precious home. Our 'pale blue dot'. Look at it! That's all we've got.

Then he shows you: see how thin the atmosphere is? Like the peel on an apple. That is what protects us.

Then: a systemic, scientific look at how global warming works.

How temperatures have been steadily rising over time, how those temperature's correlate to our increased carbon emissions (with a specific focus on fossil fuels).

How that temperature increase affects various aspects of the Earth's systems, resulting in extreme weather events (each one relentlessly clarified, and explained, and backed by examples, earth wide):

(Sorry, had to put that Ghostbusters movie quote in, in a attempt to lighten the mood!).

Al Gore is a good natured soul. He knew this part of his presentation was gloomy and sad. He told us at the beginning to hold onto our hats: the good news was coming at the end! The last half was about the progress being made! So just wait: it ends on a high note!

But, as he was walking us through this first part, it was like the air had been sucked out of the room.

There was no getting around the fact: damage has been done.

Al Gore even said that: Damage has been done.

He's been working tirelessly, devotedly, all these years on this, trying to get people to see what's happening right before their eyes...

How frustrating to have to admit that, so far, humanity can't get its act together enough to save itself from its own destruction!

His presentation switched gears to show the progress being made: the decrease in the number of coal plants in the USA, the increase in renewable energy sources world wide, how those increases were surpassing their projections, similar to the way cell phones have grown way past their projected levels of use...

Renewal energy is on the rise! The days of fossil fuels are numbered!

The future trajectory was quite clear. Things are changing!

'Cause for celebration and joy' @algore re: increase in renewal energy sources across the globe #CRinCanada
— Julie Johnson (@JulieeJohnsonn) July 9, 2015

But...and here's the kicker: will the change be soon enough?

The fossil fuel industry isn't going down without a fight, that's for sure. It's quite clear the whole grumbling around 'is climate change true?' comes from their deeply lined pockets.

It must take some seriously heavy-handed sugar coating on their behalf to swallow that particular pill and not have any after taste. Don't they like awake at night, wondering: what if we're wrong?

Because if it turns out climate change scientists are wrong then all we get is some clean air and a more responsible ethos towards the environment...but if the climate denial-ists are wrong...then, oh boy, things are going to get freakishly terrible around here...

Surely they must have their own form of insomnia?

We live here together.

"Despair is not an option." Denial isn't an option, either.

Let's get it together, people!

Environmental consciousness can no longer be a choice. We no longer have that as a luxury.

So at last I can centre my insomnia back on more mundane matters, like interpersonal anxieties, routine parenting concerns, work quibbles, existential questions, and why the heck can't I find a literary agent for my Regency mystery novel?

Enough with this apocalyptic stuff!


PS. Having undergone the Climate Reality Leadership training, I am now authorized to present Al Gore's slide show to interested parties! I can do this via the web or in person! Please let me know if you are interested! Twitter @julieejohnsonn

PPS. If you are interested in becoming a Climate Reality Leader, please go to https://www.climaterealityproject.org/or find them on Twitter @ClimateReality

PPPS: I tried to 'live tweet' the event, quoting speakers and Al Gore as they happened (I've included a few samples above). Search back in my Twitter feed to get a feel for the event! @julieejohnsonn
Posted by Julie Johnson at 16:14