Step 10 in Going Green: Write a Letter to the Editor! 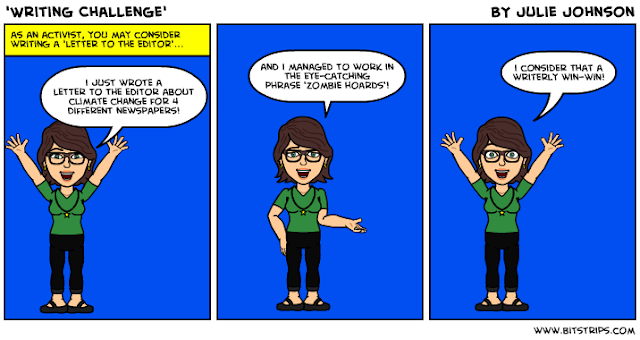 Today I wrote a Letter To The Editor about Climate Change...and sent it off to 4 different newspapers.

When you become, as I did, a Climate Reality Leader, writing a letter to the newspaper is a suggested form of activism.

As a writer, I'm amazed I hadn't thought of this before. I'm a writer. Of course I can write a letter communicating the need for climate action NOW!

Naturally, I had to see this as a challenge to my writing abilities.

Could I write succinctly? (150 words, 250 words). Could I reference the relevancy of the Pope's recent Encyclical, President Obama recent climate change plan, and Al Gore's Climate Reality conference? Could I appeal to voters of the upcoming national election in Canada? Could I come across as rational, persuasive, even, perhaps, a little funny? (For this is a serious topic seriously lacking in levity and perhaps the seriousness puts people off?)

Could I use eye catching words like 'zombie hoards'?

Now, I know what you're thinking. You're thinking ZOMBIE HOARDS do not have anything to do with climate change. And of course, technically, you are right.

When it comes to the effects of climate change, zombie hoards are not on the list.

Let me repeat this just so I'm clear: climate change does NOT create zombies.

However, if you consider the amount of cultural and social anxiety that currently centres on zombies--the TV shoes, movies, books, and blogs that fret and worry about the sudden onset of the zombie apocalypse, how we would survive such an apocalypse, etc...

Doesn't it make you wonder?

Are we sublimating our panic, fear and worry about a REAL, scientifically proven catastrophe currently sitting on our doorstep (climate change) by pouring our attention into a hypothetical, fictional scenario about a zombie-based catastrophe?

It's easier to deal with pretend worlds, after all. Easier to plan our pretend zombie survival kit then to consider the real impacts of climate change, some of which we are experiencing now...like drought, wild fires, super storms, flash floods, and so on.

Is that perhaps why zombies are so popular right now? Climate change anxiety narratives posing as zombie fiction?

Now, I love zombie tales and I would never suggest writers stop writing them.

But I would suggest that perhaps we turn our attention away from The Walking Dead et al for a moment...and face the real crisis on our hands 'dead' on. (Get it? ha ha. Further attempts at 'levity'. I'm trying.)

Otherwise we will all be like that poor group cornered by zombies in the shopping mall, scrambling together a strategy on the fly...

I don't know about you, but I certainly do not want to be scrambling about for a solution after the crap has hit the fan. Especially, when, with some effort and fore thought, we can stop the climate change catastrophe in its tracks right now.  (Namely, stop the fossil fuels, switch to renewal energy).

We don't even have to reach that point of scrambling in a corner.

Plus, we know what usually happens to that group in the shopping mall, don't we?

Just think of that analogy if you're wondering what to do about climate change. What more impetus do you need? Demand climate action now!

By the way, here's the long version of my Letter:


This November, in Paris, world leaders will meet to discuss climate change.

Climate change is a pressing issue. I’m amazed more people aren’t talking about it in their everyday lives, given it could change the world as we know it on so many levels. It is right there with zombie hoards in terms of apocalyptic impact—but, alas, unlike zombies, it is not fictional.

It is a scientific reality, one that is fast becoming ours. Not just for the ‘future generations’. This impacts everyone, world wide, right now.

It’s uncomfortable to consider environmental catastrophe but evidence of climate change related extreme weather events are happening now, all around us, hurting humanity.

The Pope recognized this in his recent Encyclical. President Obama recognized this when he recently debuted his plan to fight climate change. Al Gore presented numerous examples of climate change related devastation at his Climate Reality Leadership Conference I went to this past July in Toronto.

Search the Internet for the science of climate change, you will see for yourself.

The good news? It can be halted. But urgent action is required. We need strong leadership and commitment on all levels of government to stop fossil fuels and switch to renewable energy sources.

Climate change is not going to go away and I’d rather have someone at the helm with a plan, than someone scrambling to create one once it’s too late. We need climate action now.

Consider this when you cast your vote at the upcoming national election.

Here's hoping one of the paper's publishes it! And doesn't edit it beyond recognition!